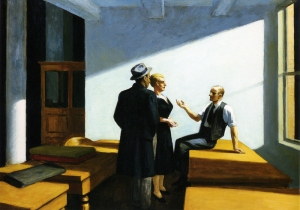 None of what follows pretends to be something no one has ever thought of before, much less done before.  I’m writing about this, though, in part to push myself with being a little braver with how I use images in class as a way of encouraging my students to look more closely at them and, perhaps, at traditional texts as well.  So, bear with me.

For many years now, I have used paintings as in-class writing prompts, as entrees into discussions of certain topics, and as the subjects for paper topics, and last year I created a prompt which asks student to write about a still from a film’s 70-minute mark–both the contents of that image and what it might reveal to us about the film as a whole that an uninterrupted viewing does not.  (In case you’re interested, my inspiration for that idea comes from here; and here is my attempt to do the assignment myself (I am asking students for a minimum of a thousand words): 70-Minute Casablanca).  I’m sharing all of this with you now, though, because our department chair has encouraged us to work with our students on becoming more attentive and patient readers, and it occurred to me that, in addition to modeling the reading of a couple of poems with my students, I could throw a painting into the mix as well.

One of my favorite paintings to use in class is the one you see here, Conference at Night.  It’s a great painting by a great painter; it lends itself well to class discussions (even by Hopper’s standards, this one is especially enigmatic, appearing to be rather “So what?” at first glance but then becoming more interesting as we discuss it); and it happens to be here in Wichita (some of my students in the past have gone to see it in the museum after our having talked about it in class).  (Just as a quick addendum, I also love using paintings by Vermeer in class, but they require more historical setting-up, which delays getting on with the discussion; I’ve also used some paintings by Magritte for short in-class writing prompts, but it’s harder (for me) to have a sustained discussion about them–they’re a little too enigmatic.  I’ve yet to try a non-representational piece for this.)  It so happens that last week, we had lively discussions about it in both of the classes that looked at it.  Below the fold, I’d like to share some things that I say/ask about it to get conversation started, and some observations my students made on it; after that, I’ll do some musing about how to up the ante for making still more substantive use of it or some other, equally-suitable painting.

I usually give a very brief introduction to Hopper’s work (his dates, recurring themes–that kind of thing).  I point out the title and ask students to think about it in relation to what they see in the painting: Does it fit comfortably, or is there some tension between it and what they see?  Somewhere in here, many students say that it appears to them that the scene is actually occurring during the day; they base this on the amount of light streaming through the window.  Here, though, we have a moment where we can really think about what we see: we all know that sunlight looks different from moonlight and most artificial lighting; in this particular instance, the key is remembering that.  Put another way, what makes this a night-time scene isn’t the amount of light but its quality.  The other crucial part of the title is “conference,” and here I try to remember to point out that for a long time now, my own tendency is to want to substitute “conversation” in its place.  That error also reveals something about how I think about this painting–the rather casual posing of the figures goes against the grain of the more-formal associations I have with “conference.”

From here, the discussion is a combination of observations about the figures and the furnishings and other objects in the room.  Regarding the latter, I make sure to point out that the brown wooden structure in the left background is one of those old-style phone booths that you can sit down in and has a desk.  It’s hard to tell exactly what it is in most reproductions of the painting, but easy enough to see when you are standing in front of it.  As for the figures, I ask students to look at/think about such things as the seated man’s hand gesture and facial expression, whether the other man has just arrived or is about to leave, what their sense of the relationships among these people is, and what it is they see that causes them to think those things.  I assure them (and this, I think, frustrates them sometimes) that there’s a range of possible answers to these questions.  We don’t know what Hopper himself thought about this scene; the card that accompanies the painting at the museum says that when they acquired the painting and asked Hopper to comment on it, he wrote back to say that he didn’t have anything in mind at all when he started it.  That said, though, at times students stray into the realm of the possible-but-not-so-probable.  Some have concluded, for example, that the man in the overcoat is a gangster of some sort because of his fedora (which they associate with gangster films) and the fact that his hands are in his coat pockets, but I remind him that in the era depicted here, most men wore hats when out in public.  I think that reading may also be helped along by the fact that he’s turned almost completely away from the viewer.  Along these lines, this week one of my students noted that both men’s faces are at least partly in shadow; only the woman’s face is fully illuminated, thus suggesting that she is in some way the subject of discussion.

Finally, there is the question of the viewer’s positioning relative to the scene.  Just this morning, after all these years of looking at and talking about this painting, I noticed for the first time that our position in relation to these figures is not centered relative to the space depicted, which would be, for us, in the space between the rows of tables.  Rather, our perspective is just to the right of that space, next to the table and even with the seated man.  Within the context of perspective, then, we are aligned with the seated man as he addresses the other man and the woman (or is it just the woman he’s speaking to?).  But does that mean that we are also aligned with him in terms of our sympathy?  Our position is such that the two long tables are between us and the seated man.  Maybe, for all we know, we have simply stumbled into this moment and are trying to remain unobtrusive, our position keeping us from fully entering the room.  The overall air of this painting, for me, is a kind of awkward dis-ease: we are present at the middle of something, but we’re not even sure what that is, much less how it will resolve itself.

So.  None of that is either exhaustive or definitive, much less “correct.”  The goal is to encourage a range of ideas and interpretations within the frame, as it were, of what we see.  As I have been writing up all this, I have also been giving some thought to devising a longer assignment that makes use of this or another painting: say, an hour of class time, perhaps with students divided into groups, discussing what they see and then, on their own, writing a close description and reading of what they see.  I have always wanted to do at least some group work in my classes, but I can’t ever seem to figure out how to make them work.  Something like this might be a way to accomplish that.  Still, there’s another part of me that doesn’t want students just to end up with a group consensus about the painting.  I want to encourage them to test and gain confidence in their own thinking and not just look for what everyone else thinks.

That’s all I have on this.  If you’ve read this far, I truly thank you.  If you have any comments or suggestions, I hope you’ll leave them below.