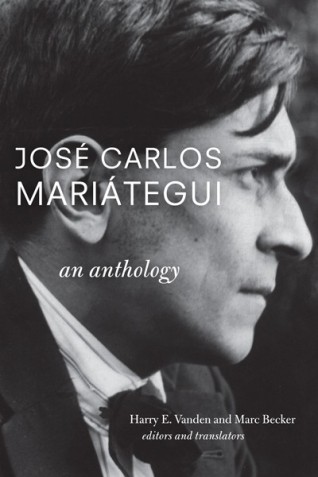 I want to state from the outset that I’m glad this book is available.  As Vanden and Becker note, Mariátegui is still not well known in this country, and this collection aims to both remedy that and augment the other, best-known (in the United States) collection of his writings, Seven Interpretive Essays on Peruvian Reality I had first run into  Mariátegui’s thought in a book on Faulkner, Hosam Aboul-Ela’s  Other South: Faulkner, Coloniality, and the Mariátegui Tradition, and discuss at length Mariátegui’s idea that history is comprised of “stages that are not entirely linear in their development” as it might apply to Go Down, Moses’ narrative structure in  this old post.  Thanks to this anthology, I now know considerably more about Mariátegui’s thought than I had before.

Apart from his idea about history’s non-linear development, though, Mariátegui is fascinating to me more generally as an example of a thinker from Latin America (in his case, the Peru of the turn of the 20th century) who is drawn to a philosophy from Europe (in his case, Marxism) who, instead of slapping it on his country and region to use as a kind of one-size-fits-all template for making sense of its history and culture, does something almost like the reverse: he looks closely at his region and its people, its history and culture, and borrows and modifies elements from Marxism to make it a more-fitting tool for change.  As just one example: in several writings included in this anthology, Mariátegui implicitly notes the common root in the words communism and community and argues that Inca society had been its essence a communist society because of its communities’ agricultural lands had been held in common by the members of those communities: “Inca communism, which cannot be denied or disparaged, developed under the autocratic rule of the Incas, is therefore designated as an agrarian communism” (in “The Land Problem,” p. 73 of the present edition).  A kind of communism, thus, not only pre-dates Marx but is actually autochthonous to this hemisphere.  Mariátegui goes on to note that indigenous and mixed-race communities in Peru still retain this communal impulse as they tend to organize and work together to complete large-scale projects, and he concludes that Peru’s peasant class, with training and organizing led by people from those communities, would be receptive to those parts of communism that would lead to workers’ seeking to control the means of production (in most Peruvians’ case, this would mean controlling the land).  It is thinking like this, along with Mariátegui’s full-throated argument for the necessity of myth in a culture (thus rebutting orthodox Marxism’s rejection of religion), that explains simultaneously (for me) both Mariátegui’s continuing influence in Latin America and that he remains relatively unknown in this country.  And, indeed, Vanden and Becker write that  “Mariátegui’s writings . . . . represent the dynamic, creative vein in Marxist thought that can, we believe, best nourish cogent analyses and potent praxis” (9).

So, then, why is this book so frustrating at times?