We’ve come to the end of our fifth week of the fall semester. I suppose that, under the circumstances, things have gone about as well as can be expected; certainly, we’ve handled things much better than some other places I could name. Campus-wide, we’ve had only a small number of cases of COVID among students, faculty, and staff, which is of course good; the administration, though, anticipates a spring semester much like this one: a mix of face-to-face classes and various hybrid formats. In short, it’s been a busy time, which has kept me away from “here.” A growing pile of books and articles here in the study, though, attests to what I’m going to call “research” for the book and for a couple of other, teaching-related ideas I’ve been kicking around.

Before I lose track of it, I want to post a link to an online archive I’ve just come across via Twitter, Stones That Calculate: https://stones.computer/ Its subtitle is “Collection of resources about post-digital materiality,” which sounds like it would come in handy for people interested in larger contexts (and consequences) for discussions about our dramatic shift toward the computer as a medium and regulator of human experience. Here’s its preamble:

By stones that calculate, we mean the assemblage of all information processing devices or infrastructures and their socio-political impact on our automated society. This website is an online collection of resources that maps academic as well as artistic perspectives which reflect digital conditions within materialist discourses. We have examined the research field on the basis of three topics from which we later derived sixteen aspects.

This archive is an evolving exercise to provide an entry point and simplified overview for inspiration and further explorations.

I’m looking forward to having a deeper look around this collection for pieces that might come in handy this spring when we talk about AI and machine learning in my comp. classes. 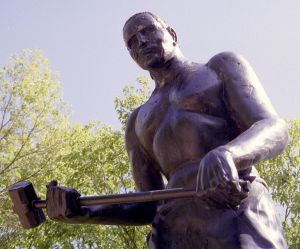 Statue of John Henry, Talcott, Summers County, West Virginia. This is one of two sites (the other is in Alabama) that lays claim to providing the historical foundation for the story of the competition between John Henry and the steam-driven machine. Via Wikipedia.

Actually, this isn’t so much a Teaching idea as it is a nudge to me to do some archival stuff in the future in support of a Teaching Idea.

For a few years now, I’ve had the idea of using the multitudinous pre-WWII versions of “John Henry” as a way of getting adventurous students to think about and speculate on the subjects of American legendary figures, the mechanization of labor, differences and similarities between white and black attitudes about labor, and–heck, why not?–even thinking about music itself in an age before music-making and -marketing had become a national industry.  Well, you can probably guess, just from that little description, that none of my students has yet taken this up as a research project.  Some of that’s on me and how the prompt is written: it’s just too busy.  But some of it is surely due to the scattered nature of the materials themselves, not to mention the rather ephemeral nature of the Web itself: as a source for my students, I had been relying on one blog’s round-up of around 100 versions of “John Henry” or songs that in some way addressed that tradition . . . and then that blog just went away.

So, I changed the prompt to refer students to YouTube, just telling them to go trawling around in there for different performances, but that breaks one of my rules for assignment design: Don’t ask students to do anything you yourself wouldn’t want to do.  I must have subconsciously given up on the idea because I hadn’t felt especially motivated to do anything to improve it.  But this morning, I read this long article by Ann Powers at npr.org on the current state of the archiving of music on the Internet, and a voice inside my head said, “Hey!  Why don’t YOU build a ‘John Henry’ archive?”

So.  It won’t be this summer because of book-project stuff, but this fall or next spring that’s what I’ll be doing.  It’ll have some links to historical stuff, but its main focus will be on the songs themselves, along with background information, wherever available, about the performers.  I’m persuaded that the number and variety of this/these song(s) can tell the thoughtful listener a great deal about us as a nation, or us as we existed around a century ago; maybe, with the existence of one centralized place for recordings and some information, I can encourage my students (and whoever else might happen upon it) to think about those things, as well.

EDIT: Before I forget it, there was, accompanying the Powers article above, this round-up of good online archives of music, some of which will come in handy once I get started on this thing.